My Story in a Nutshell - Background and Testing Ground

Background
My entry into spirituality and the awakening process was initially catalyzed by hearing the word "meditation" at 19. Growing up in a Christian family with no knowledge of Buddhism or other Eastern wisdom teachings that include meditation as a practice, I was mysteriously compelled to learn and practice meditation. My commitment to this practice formed immediately and intensely. My life was instantly infused with a sense of meaning and purpose previously unknown to me. My personality went through a radical change as a result. I stopped using alcohol and drugs as an escape from suffering. I lost interest in many of the activities that had previously been part of my life. I became laser-focused with my studies, so I had time to pursue my new found passion for meditation and Buddhism. The power of one word at the right time!

When I returned to University for my sophomore year, I read more books on spirituality than I did for my coursework. An incredibly impactful story I read was about a well known and beloved Sage who lived in India in the first half of the 20th century. The story was about his awakening to the Self that transcends death. He described experiencing a "sudden and violent fear of death," and a spontaneous inquiry into the dying process and what survives it.

My father died the previous year, suddenly and at a young age. Perhaps, as a result, this story resonated with my own deep need to know what survives the death of my body. And, so I began to contemplate my death. I would light a candle in my darkened bedroom every night before bed and lie on the floor and imagine and feel what it would be like if my body were dead. What was left? After a couple of months of this earnest inquiry, during a moment of actual danger and uncertainty, my mind stopped, and my head seemingly vanished. What followed was a 2-3 month "grace period," in which I experienced the first deep taste of the bliss of surrender into the present moment. It would be hard to over-emphasize the wonder and value of this time!

When this extended glimpse passed, two things were apparent: First, this condition of a mind surrendered to the Self (aka Great Mystery) gave life a significance, depth, and wonder previously veiled from my perception. Secondly, the apparent "fall" from that condition back into the sense of being a separate self was in such stark relief that I entirely devoted myself to the quest to return to the freedom I knew was possible for the next ten years. Awakening from the prison-like experience of identifying as a body and mind now felt like a life and death matter for me. For to live as an ego seemed like death compared to consciously realizing the transcendent and immutable Self.

I spent most of my 20s playing the role of the seeker and sadhu, going on many journeys and adventures inwardly and outwardly. I became drawn to a spiritual teacher and mystic philosopher and became part of his community of fellow seekers. I went thoroughly into all that this community offered for five years - until the teacher's death in 1990. Within days of his passing, my inner voice assured me that I would be meeting another teacher. Within a year of his passing, I did.

Shortly after meeting my new teacher in person, I entered the Dark Night of the Soul. It was a six month period of utter despair and dread. I experienced my separate existence as a horrific nightmare, and awakening from it seemed to be the only salvation. Supported by my new teacher and others in the lineage of Ramana Maharshi, this period of darkness resolved in a profound awakening from the mistaken identity of ego and awakening to the recognition of unchanging Truth as the real "I." A series of deepening realizations followed this initial moment of self-recognition. ​

During this initial period of deepening realization, it became crystal clear that happiness was not a state, but a feature of my natural condition. Until that point, I had unconsciously confused the desire for true freedom and fulfillment with the achievement and stabilization of a particular and lasting state. I then understood with my whole being that every state was happening in the truth of who I am. All states and forms are ever-changing, while the Self is ever here and unmoved. As a result, I no longer needed to search for special experiences or defend against the pain inherent in mortal life. I could now freshly realize each experience for what it was: a display of dancing emptiness! 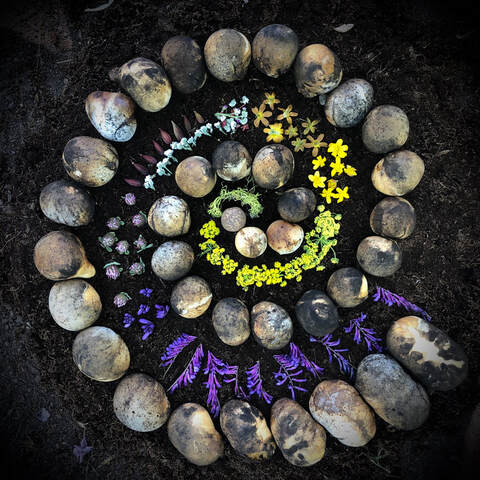 ​
Testing Ground. In 1992, I experienced what may be a rather unusual convergence of karmic circumstances. (For lack of better words.) On the one hand, the sought-after release from the knot of suffering arrived gloriously. And simultaneously, my body began a 20-year process of chronic pain and fatigue that was far beyond my previous experience of what either "pain" or "fatigue" even meant.​

With the realization of God-centered happiness came the understanding that ongoing surrender was its natural companion. To remain identified with and living from the core of my Being, I had to be willing to let go of what I thought I needed but did not have. I had to be ready to make room in my heart for whatever I did have, but I thought I did not want or could not bear. In other words, I needed to notice and surrender any reactivity to all experience, moment to moment.

I am very fortunate that my soul's purpose has been to realize unconditional peace and happiness with everything and everyone. Perhaps as a result of this clarity of purpose, I embraced the discipline of surrender without hesitation. As it became clear that there were no easy answers for my increasingly disabling condition, I realized that I could welcome this seemingly catastrophic circumstance as an ally. While I wanted to recover and return to the physical vitality I had previously known, I wanted ongoing surrender even more. As long as pain and disability were here, I knew I had an opportunity that I would not consciously choose, but which was very potent and effective in serving my highest purpose.

This time of testing was long, fierce, and confirming of the truth of what is unconditional. I had to let go of many outdated assumptions and beliefs. I had to learn to welcome feelings and sensations I initially feared and wanted to change. I experienced many moments of being taken to the edge of what I thought I could accept and found a way of doing so. Again and again. These were very happy and peaceful years, even though they were also quite hard at times.

After 20 years of having chronic pain and fatigue, mostly house-bound with a host of other unusual symptoms, I found myself miraculously able to be physically vital again. After working as a teacher for years using aids such as recliners at retreats or a wheelchair to fill-in the walking I could not do, everything changed. In June of 2013, I found myself rapidly getting stronger. Soon I was walking and then hiking. I was soon running up hills. Then going to the gym and lifting weights. I was kayaking in white water and traveling to visit friends and family around the country. And, I was able to lead retreats without needing to make accommodations for the delicacy of my body. I enjoyed this time immensely!

Then, in the Fall of 2015, I began to experience a severe and sudden dysregulation in my cardiovascular and nervous system. It was both more intense and more severe than everything that I had experienced previously.
​
On one level, this was catastrophic. However, from all I had already been through, I knew I had the choice to surrender. With the willingness to do so, there was a rapid opening into a depth of experience that was simultaneously terrible and wonderful. Terrible, because as far as difficult human experiences go - I was clearly in the deep end of the pool. Wonderful, because even though it was painful and challenging in many ways, Love was still here, gratefulness was still here, I was still here. All was okay at my core. And, I was deeply okay with feeling not-at-all-okay at times. For me, this is what a real miracle is.

While I was able to work during most of the 20-year phase I described earlier, this last season of my life was so disabling that I could no longer work in any capacity for most of it. Occasionally, I extended myself to a small group that I had been working with before this began. But even this was rare. Much of the time, I lived within four walls. Sometimes months would go by without speaking in more than an occasional whisper, due to the energy it took to do so. My beloved partner would talk to my doctors on my behalf, translating my whispered thoughts.

I believe that I am now very much on my way to full recovery. I cannot say it has passed fully, but after years of trial and error, I seemed to have found a degree of homeostasis on which I can build strength and endurance.